As you saunter down Scholes St. to my new residences you are certain to encounter a wide variety of different people.  From young hip recent college grads, to 70 year old Hispanic women, to young children playing in the streets, to Armani clad businessmen, they all make appearances around the block roaming streets that parade low riders with window shaking bass being followed by a Ferrari, separated by a 95 Honda.  This large hot mess of warehouses and trash cluttered streets goes by 2 aliases, first as reported by the hopeful youth ‘East Williamsburg’, and secondly by the more humble of its inhabitants ‘Bushwick.’  Truly it does straddle the line between the expensive and trendy Williamsburg and the worn but more useful industrial zone of Bushwick, I like to think that I live on the E. Williamsburg side, but as I wander through the area I am convinced I must be in Bushwick.

It has been a real challenge adapting to this sort of life coming first from the crystal clean air and sweeping mountains of Albuquerque to live in the bustling and crowded, yet beautiful, East Village was a transition of its own but easily justifiable due to the excitement of Manhattan.  This new move from the city into Brooklyn was luckily slowly graduated by first moving to our Graham Ave apartment which is conveniently located in a neighborhood similar to the East Village.  Still in touch with a slightly younger crowd and easy walking access to my favorite coffee shops I was able to adjust, and more so enjoy, the more open aired and quieter perks of life in Williamsburg.  From Graham to Scholes, where I currently live, is a move farther into the previously unexplored regions of Brooklyn.  Suddenly I find myself amongst real life, away from endless lines of cafes, restaurants, and stores and into warehouses, trucks, and streets that actually empty at nights.  I have spent plenty of time out among the quiet street lining warehouses since joining on to the distillery which nestled into one of these remote streets, but living here is another story all together.  After finally learning to sleep above booming bars and roaming sidewalk parties, the stark silence of a neighborhood that actually sleeps at night is almost eerie.  My now very short walk to work on an early Sunday morning isn’t a navigation through dazed and drunken zombies who somehow are still lurching their way home, but through near deserted  alleys with… birds chirping.  Much to my surprise, and great joy, I found that my new local coffee shop is already open early in the morning and the owner hard at work cranking out coffee for the people who have yet another day of work in front of them in spite of it being Easter Sunday.  It’s all just more practical out here in Bushwick, and frankly quite sobering.

I was at first apprehensive about liking this new and very foreign place, it was a far cry from my high altitude perch in New Mexico and it lacked the overwhelming charm of the city, but just a few nights in of wandering around the area, and some peaceful morning walks, it has already begun to reveal its hidden secrets.  At night small tucked away bars host a normal amount of people, and waltzing among the concrete bunkers feels almost like getting lost in the foothills.  I think that before I write off this neighborhood, it is going to take some real adventuring into what it has to offer.

It has been so very cold here the last few days with highs ranging from 18-22 degrees and lows too low to recount.  It makes for an amazing excuse to stay in, get delivery, and drink hot cocktails!  As it turns out bourbon goes great with a little lemon, some honey, and a cup of hot chamomile tea, I suggest settling down by the fire with a mug of that, although you may not get up again for the night.  Money saving tip: The more bourbon you drink, the lower you can keep the thermostat!

After quite the wait we finally have un-casked the second round of bourbon at the distillery.  Having bottled a new batch of hand picked barrels we now have something to actually gauge our progress as all of us at Kings County learn our way to the ultimate bourbon.  We

knew that the last round of bourbon we put out, our first ever, was going to be something that we had no control over.  Although it came out incredibly successful for having no idea what we were producing, there were obviously things about it that we needed to tame i.e. the intense and somewhat over bearing pine scent and flavor or the the cloying sweetness that was way too rounded and overwhelmed any of the sharp bite.

Being so young, and frankly so ignorant, as a distillery we are learning to tackle problems and improve our work in order to better our bourbon.  It boils down to a few different sets of ideas that we are constantly evolving the first being efficiency: trying to make sure we are doing every process the best and most efficient way, and the second: trying to actually influence the flavor of the end result.  Making things run more efficient is by far the easier task, it is easy to recognize what we need to do to improve a certain system or how to cut back on waste, and easy to quantify results as they are so visible.  Taste…  Taste on the other hand is so hard to wrap your mind around.  Not only do we have to establish what we are going for, which has become very apparent is very different for every single person involved, but also how to get to that different taste.  How do we make a better tasting bourbon?  It ranges from the consistency of how everyone works to the cooper that produces our barrels; some things we have control over and somethings we can’t avoid.  Keeping all of this in mind, this week we handpicked from all of our aging casks the set of barrels that we balance each other out to achieve the results we wanted.  Each barrel we fill ages completely different then the next all showing different qualities, one being sweeter and another showing strong cinnamon flavors.  It is our job to select the barrels that will come together to make a whole and complete palette.  So after cracking open the 10 barrels that were aged to maturity, we hand selected 3 to bottle this week, and I think the results show.  It was unanimously agreed upon that this bourbon was leagues ahead of the last, and I can only hope that we continue to see it progress from here. 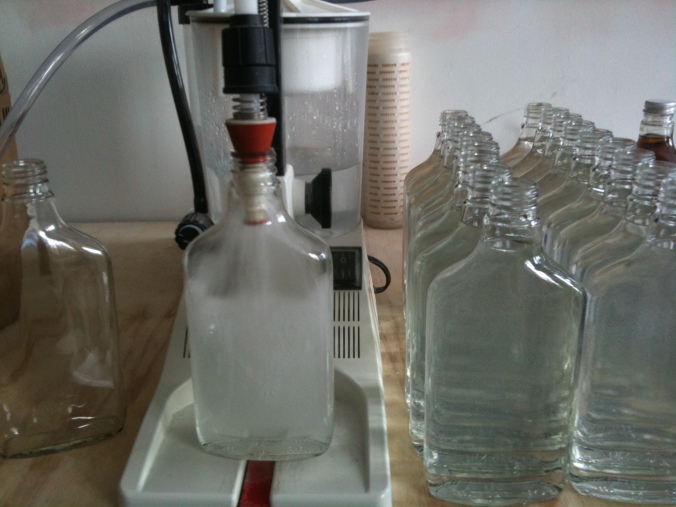 On the pages of the newly released GQ Magazine. Together as usual. That’s Jim Meehan in the picture of our bar, the mastermind behind it all.

Sometimes you just have to step back and laugh about the situation.  Example: Say you were going to go to a cabin for the night, some place just outside of the city, just to take a few breaths of fresh air.  You make all the arrangements (car, food, wine) and then you get up early in the morning and hit the road. As you are driving you finally receive the directions to the cabin, and low and behold you are not 1 hour away, but 6 more hours away.  6! Tanner, Jackie, Shan, and I ended up near Canada (not hyperbole) 7 hours away from the city.  As it turns out the Adirondacks are extremely beautiful, and we now have seen much of the very green upstate New York area.  Luckily the drive was extremely scenic, because there were 7 hours of it watch go by.

Ok, beyond the fiasco of not being anywhere close to where we thought it was, the trip was actually quite nice, here is how the story goes:

After being cooped up on our island for so long we decided it was time to go and get some fresh air in our lungs.  Tanner and I spent some time finding an available cabin to rent out for just one night, we would have loved to spend more time away but between all of our schedules there was only 1 night to be found mutually free.  We located a quaint cabin in the Catskills, so we thought, which was an easy 2 hours away.  Early out there, enjoy the morning, afternoon, and evening, and then get quickly back into the city the next day.  Well it didn’t actually work out that way, but at least we still got an adventure out of it.

Mimnaugh, the name of our trusty Mazda 3 hatchback.  This little guy came to us from the people at Zipcar!  He was actually a real joy to drive, and after not being behind the steering wheel for over 8 months now it was extremely refreshing to cruise the open roads.  I had a really good time driving.

The Olympic Cafe, the first stop on our journey out to the cabin was for breakfast.  Fortunately we found a lovely little town centered around what could only be described as the world’s most ultimate diner.  I do not give it this rating for the amenities, appearance, or location, but rather for the meal that was presented to us.  Tanner and I of course had to order the signature dish of the diner ‘The Olympic’ which even after the disclaimer from our waitress blew our minds.  Brought to us on 2 plates per person was a feast fit only for gold medalists: 3 Pancakes, Slab of Ham, 2 links of sausage, 3 pieces of bacon, 3 scrambled eggs, 4 toast wedges, and hash browns.  I tried to take a picture of it, but there is not a camera capable of taking a picture of that scale.   After our bypasses at the attached emergency room, we continued on our journey north.

After what seemed an infinite amount of miles, we finally pulled up to the cabin, and even though it was already 6 pm, it was clear that the trip had been worth it.  Perched on the

edge of a serene pond nestled into thick forest, the cabin was picturesque.  From the wrap around porch to the fire pit, everything was exactly how it should be.  We wasted no time getting settled in cracking a beer within 10 seconds of stepping out of the car.  We quickly pulled out the chips, salsa, and canoe for an unparalleled combo.  The lake was a wonderful warm temperature with water so clear you could see the bottom even at it’s deepest.  We spent the evening canoeing across the miniature lake.

The rest of the night was spent around the campfire cooking, enjoying wine, and watching the meteor shower.  Enjoying simply being away from the city.  It was nice to actually put on a long sleeve shirt and jeans.  It was obvious by the next morning how badly we needed to get out of the city.

The next morning we were back in the car by 7:45 AM and headed back towards the city.  All and all it turned out to be a supreme fiasco, and a lovely getaway.  Visual Description: